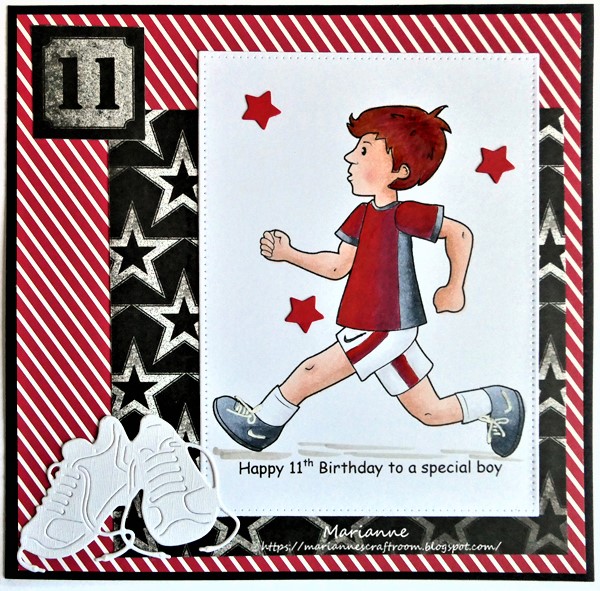 Well I have been home from holiday a week and it has been all go. This is the first time I have been in the craft room and that is to blog this card which I made before I went away. I have some lovely new images from LOTV and am printing a couple out and hope to get one made maybe later today. on the image. Not only did she do that but she removed the football and logo on the shirt and added the logos to his shorts and trainers. I coloured him with Copics, I remembered I had a die of a pair of trainers so that was a perfect embellishment.
I was asked for a card for a young man who likes running. I didn't have a suitable image but I had a footballer from Pink Gem. So as I was previously on the Pink Gem DT and Janet Roberts is so helpful I asked if she would mind changing the football boots for trainers
The garden went mad whilst we were away. There was hardly a flower and we came back to a riot of colour and of course lots of weeds. We have done the front garden and hubby is cutting the grass so the next job is to start tackling the back garden.
We had a decorator in Monday and Tuesday to paint the ceiling and walls in our bedroom. Graham has already done all the paintwork. So everything had to be moved out and back in again. I decided the curtains didn't go with the new wall colour so off to Dunelm yesterday for new ones plus a bedside lamp and lampshade. We bought a couple of lovely pictures from a photographers on holiday so they have to be put and others moved.
Good job we are feeling refreshed from our holiday as it has been full on since then. Hoping to have another card to share soon. Right now must get on with the garden.
Posted by Marianne's Craftroom at 10:33

A super card Marianne, it was kind of Janet to alter the image for you.
Pauline - Crafting with Cotnob
x

Your card is soooo perfect for this young man!
Sounds like a little craft time might be nice after all the chores!

Beautiful card for a boy and the trainers in the corner look great!

Hi this is a fantastic card. I love it. Well done with the decorating. Take care. Hugs Jackie

That was really kind of Janet your "runner" looks fantastic

Fabulous card Marianne, great layout and colouring and the trainers are the perfect embellishment.
That sounds a lot of work, as you say good job you are feeling refreshed, Kate x

Great card for a 11year old boy. You have to make use of the good weather when we have it!! So I was in the garden all day today. Still more to do though. Glad you had a lovely holiday. Hugs, Carol S.xxx

Great card and love the outcome you produced. As always perfect. x

A brilliant boys card Marianne. Glad you had a lovely holiday.
Lorraine x

Gosh you have been busy.loving this card. Those trainers are a fab embellishment too. X 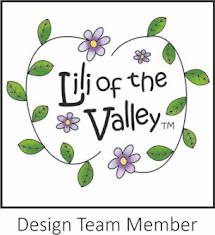 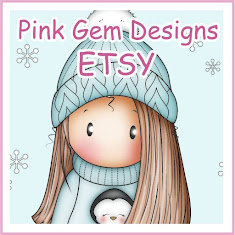